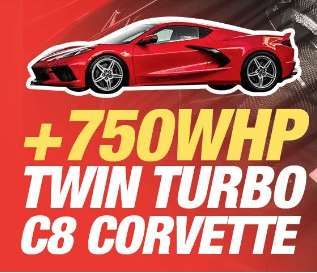 Fact—FuelTech is more than just drag racing! For the past several years FuelTech USA has been creating innovative ways to integrate its ECU products with late-model vehicles, particularly ones where an
aftermarket tuning solution is unavailable. The test subject is a brand-new 2020 Corvette, which utilizes an FT600 engine management system in a unique way and the team has already made 754 whp with a pair
of turbochargers. It is believed to be one of the most powerful C8 Corvettes in existence, and the team is just getting started.

The OEM engineering group made the factory ECU nearly impossible to access by the aftermarket, presenting FuelTech with a unique opportunity. The team has been able to integrate an FT600 ECU to control a supplemental fuel supply, other engine functions, and manipulate the stock ECU readings,
allowing enthusiasts to add turbochargers and superchargers and have the ability to finely tune the engine for maximum performance. Plus, the FT600 is capable of data logging a full suite of FuelTech and OEM sensors, providing enthusiasts with an incredible amount of data.

The FT600 isn’t alone in this adventure. There are several other FuelTech products utilized on the vehicle. Two WB-02 Nano sensors are fit in the exhaust to monitor air/fuel through a Bosch LSU 4.2 sensor. It is
connected to the FT600 via a CAN bus connection. Other sensors wired into the FT600 are a backpressure canister, 150-psi pressure sensor to monitor the port fuel injection, two backpressure sensors for each turbocharger as well as turbocharger speed sensors. The team also included a FuelTech EGT-4, which features individual cylinder EGT monitoring, aiding in complete data collection and engine safety.

The FT600 controls an auxiliary set of 1050cc/min fuel injectors (one in each port) and an independent Aeromotive fuel system—complete with its own fuel cell, fuel lines, and brushless 5 GPM spur gear electric fuel pump. The Aeromotive pump has a low speed mode for normal driving conditions and the fuel pump speed is increased when under a load. The FT600 handles all of the fuel pump control.

The team elected to not install an intercooler; instead they chose to use VP Racing Fuels M1 to supply the addition fuel under boost and act as alcohol injection to cool the inlet air temperatures. The FuelTech O2
correction works in conjunction with the factory ECU to create the perfect air/fuel ratio under all conditions, keeping the engine safe in normal and spirited driving conditions. The factory OEM computer continues to control the Direct Injection, with certain sensors being manipulated by the FT600. The Corvette runs VP Racing Fuels MS100 unleaded gasoline in the factory tank for the Direct Injection; it replaces the regular 93-octane pump gas.

The C8 Corvette development vehicle is unique as it is more than just the base LT2 V-8 engine that produces 495hp. As a side note, the test car produced 458 whp on the FuelTech hub dyno during baseline tests. The aforementioned twin boost makers are Garrett G35-900 mirror image turbochargers, which are part of a custom built kit, with assistance and consulting from the LMR top-mount turbo C8 Corvette. The engine was also fortified, as the goal is to exceed 1,000 rwhp with drivetrain upgrades.

The LT2 has been filled with GPI drop-in forged Diamond pistons and connecting rods to ensure longevity when the boost is turned out. The boost is adjusted using a pair of Turbosmart wastegates, which the team controls with the internal boost controller of the PowerFT engine management system. Turbosmart GenV Race Port blow-off valves play an important job of controlling airflow in the turbo system. A UPR Products oil separator helps keep oil out of the intake manifold, a common problem in boosted late-model vehicles. LMR provided the larger stainless steel exhaust to expel the spent gases.

The rear axles have been upgraded to a pair of robust GForce Performance Engineering axles. The factory clutch is still in service and the limit appears to be 750 whp, a better clutch is being developed by Dodson Motorsports and the team is anxious to get it in the car. Once the clutch problems are solved, their goal is to crack the 1,000 whp barrier with the test vehicle. Glasslife Atlanta added its ceramic coating to make sure the Corvette looks good while they are making big power.

FuelTech is working on a C8 Corvette jumper harness for an easy installation of any PowerFT engine management system and allow enthusiasts to retain the factory electronics. According to FuelTech reps,
users can choose from an FT450, FT550, FT550LITE (without screen for hidden install), or FT600 engine management system depending on the level of options. Each PowerFT engine management offers sequential injection and ignition, O2 closed loop, Data Logger, Delay Box, Boost Controller, Nitrous Controller, and much more. The ECU box doubles up as an LCD display and touchscreen showing real-time data and allowing the user to make adjustments without a PC connection. All PowerFT ECUs also
include data logging capabilities, making the FT600 and its sibling products a true all-in-one unit.

From the record-breaking, championship racing drag racing world to the late-model market, there is a reason you’re seeing #FuelTechEverywhere.